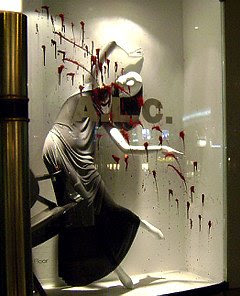 Barney’s, who is arguably Gotham’s most famed fancy clothier, hurriedly removed their latest window displays after customers and passers-by objected to scenes depicting female mannequins being strafed by bullets.

Simon Doonan, creative director of Barneys, said the displays were installed while he was away overseeing advertising shoots and that he had ordered them dismantled. They were taken down shortly after the Daily News called to inquire about them yesterday afternoon. “We encourage our display people to be creative. We give them a lot of latitude, but this clearly crossed the line,” he said. “It’s as if someone saw a bad Hitchcock movie.”

The outfits were to die for! Rimshot!