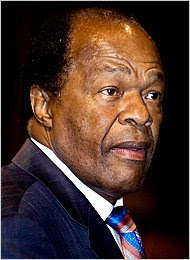 Marion Barry, the noble defender of marriage who recently joined with Bishop Harry Jackson to fight DC’s same-sex marriage recognition bill, has been arrested for the 87th (or so) time.

D.C. Council member Marion Barry was arrested last night and charged with stalking a woman after the woman reported that Barry was “bothering her” as the two traveled in separate vehicles in Anacostia Park, police said this morning. At about 8:45 p.m., a woman traveling near the intersection Good Hope Road and Anacostia Drive flagged down a U.S. Park Police officer to report that a man in a vehicle nearby was stalking her, said Sgt. David Schlosser, a Park Police spokesman. That man, Schlosser said, was Barry. The officer interviewed the woman and Barry, then arrested Barry and took him to the Park Police’s Anacostia Station, Schlosser said. There a detective interviewed Barry again, and police charged him with a misdemeanor count of stalking. Barry was released and ordered to appear in court, likely sometime later this week, Schlosser said.

Goddamn bitch set him up!