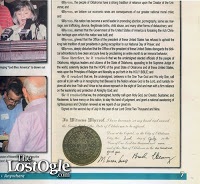 Last month OK state Rep. Sally Kern issued her Proclamation For Morality, a hateful resolution that blamed gays, among others, for the decline of the U.S. economy. The resolution has not been adopted, but according to a blog called The Lost Ogle, that didn’t stop the Baptist Messenger from forging the signatures of the governor and the secretary of state onto the document.

Yep. The Baptist Messenger — an established weekly newspaper with a paid circulation of over 85,000—decided to photoshop Governor Henry’s signature on the embarrassing and archaic “Proclamation for Morality.” And to try and make the piece of right wing trash look even more legitimate, they placed the text of proclamation onto Executive Department letterhead and forged the signature of Secretary of State M. Susan Savage next to the state seal of Oklahoma.

Yeah, this is scandalous. And yeah, this is wrong. But know how it makes me feel? It makes me wish I was Baptist. These people can get away with anything! They can forge our Governor’s signature to a document, buy influence key elections and even hijack every Braum’s in the state on Wednesday nights. It’s just too much power for one group to have, and I want a part of it. Seriously, think of all the fun we could have if we were Southern Baptists. We’d be unstoppable!

There have got to be some legal repercussions for doing this, right? Don’t hold your breath. The Liars For Christ™ will shrug this off.

UPDATE: The Baptist Messenger has issued an apology.

In the July 16 Messenger, the graphic representation of the Oklahoma Citizen’s Proclamation for Morality was misleading, indicating that Oklahoma Gov. Brad Henry and Secretary of State Susan Savage had signed the document. This is not the case, and the Messenger staff apologizes for the oversight and error.

“Misleading.” Rather than “what we published was an outright lie and forgery.” Shrugged off, as predicted.

Previous Haters To Turn In Petitions To Repeal Domestic Partners Law In Washington
Next Sen. Sam Brownback: We Don’t Want Man-Beasts Or She-Fishes!