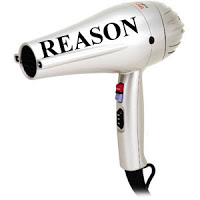 The Blowdryer Of Reason In March I blogged about the Certificate of Debaptism and mentioned that I’d like to be removed from the baptism records of Annunciation Parish in Havelock, North Carolina, something I’m still working on. Meanwhile, USA Today tells us about an amusing debaptism ceremony taking place at some atheist conventions.

Up until last summer, Jennifer Gray of Columbus, Ohio, considered herself “a weak Christian” whose baptism at age 11 in a Kentucky church came to mean less and less to her as she gradually lost faith in God. Then the 32-year-old medical transcriptionist took a decisive step, one that previously hadn’t been available. She got “de-baptized.” In a type of mock ceremony that’s now been performed in at least four states, a robed “priest” used a hairdryer marked “reason” in an apparent bid to blow away the waters of baptism once and for all. Several dozen participants then fed on a “de-sacrament” (crackers with peanut butter) and received certificates assuring they had “freely renounced a previous mistake, and accepted Reason over Superstition.” For Gray, the lighthearted spirit of last summer’s Atheist Coming Out Party and De-Baptism Bash in suburban Westerville, Ohio, served a higher purpose than merely spoofing a Christian rite. “It was very therapeutic,” Gray said in an interview. “It was a chance to laugh at the silly things I used to believe as a child. It helped me admit that it was OK to think the way I think and to not have any religious beliefs.”

The article notes that while 100,000 Brits have downloaded the debaptism certificate, holding ceremonies such as the above appears to be a purely American phenomenon. Video here. According to most denominations, however, Christian baptism is like the mafia. Once you’re in, you’re in.