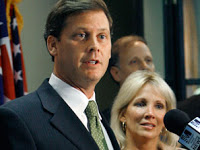 Yet another affair among the GOP reps that have lived in the cult-like Christian “C Street House” in DC. This time, the wife is suing.

The estranged wife of former Rep. Chip Pickering (R-Miss.), who served 12 years in Congress before retiring in January, has filed a lawsuit against his alleged mistress, claiming their adulterous relationship ruined the Pickerings’ marriage and his political career. Leisha Pickering is suing Elizabeth Creekmore Byrd, her husband’s alleged mistress, for alienation of affection. The Pickerings filed for divorce last year, but the case is not yet final. Leisha Pickering says in her lawsuit that Creekmore Byrd originally “met and had a romantic relationship with [Chip] Pickering which ended prior to their college graduation.

That house sees more action than the Crew Club!