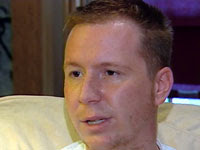 Rainbow Lounge bar raid victim Chad Gibson wants the cops involved in his arrest prosecuted and says the city is covering up the real details of the incident.

Although the city has asked the U.S. Attorney General to review the investigation, Gibson said he has lost all confidence in law enforcement. “You used excessive force and that’s why I got hurt,” he said. After seven days in the hospital, he’s not out of the woods. There is still a blood clot in his brain, behind his right eye. “I’m scared that something might happen,” Gibson said. “It might start bleeding.” Gibson said the city and officers have pointed the blame in the wrong direction. “They have blamed it on me, that I was drunk [and] that I hit my head,” he said. “I groped the officer. I did this. I did that. You know what, no … Accept responsibility.” Gibson said he is also frustrated at the city pointing the blame at the TABC. “Even if the Fort Worth Police didn’t touch me, they watched it,” he said. “They watched other people do that to me.”

The Fort Worth police department is still interviewing eyewitnesses.