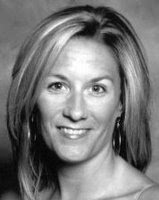 Despite last week’s flap that she’d encouraged racist language on her Facebook page, this weekend Audra Sigler Shay was elected the new chairman of the Young Republicans.

Hundreds of delegates from across the country spurned the controversy in voting for leaders at the group’s convention at Downtown’s Hyatt Regency Indianapolis. Calling the posting political mudslinging, delegates selected Audra Shay, 38, as chairman. She will head the group of up-and-coming Republicans ages 18 to 40 for two years. In a vote closed to media coverage, Shay defeated Rachel Hoff 470-415, according to TheConservativist.com blog. On the online social networking site Facebook, Shay had supported a friend’s bashing of President Barack Obama, according to a column on TheDailyBeast.com by John Avlon, a senior fellow at the Manhattan Institute. “Elections bring a lot of emotion out of people,” said delegate Katherine Miller, 24, Lexington, Ky. “But this controversy really is not the decisive factor for the majority of people voting here. There are so many important issues we are considering.”

Shay claims that she had not seen the racist comments that spawned the controversy, although she did un-friend two people who complained about them minutes later.