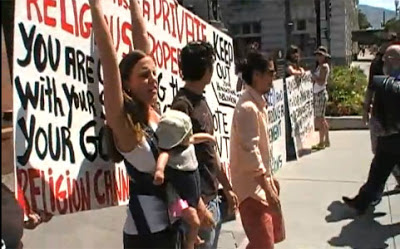 At The Salt Lake City Kiss-in Things got a little heated this weekend at the latest kiss-in in Salt Lake City.

A mass-kissing protest near the Mormon church temple Sunday drew a shouting match between gay activists and a group of faithful Mormons. For the second consecutive weekend, about 100 people gathered to stage a “kiss-in” to protest the treatment of two gay men cited for trespassing July 9 after they shared a kiss on the plaza owned by The Church of Jesus Christ of Latter-day Saints. Both gay and straight couples exchanged kisses during the protest. Demonstrators were greeted at the south entrance by a group of faithful Mormons carrying large signs that denounced homosexuality, prompting a heated verbal exchange. Police say no one was arrested or cited, despite a large group exchanging kisses by a reflecting pool at the plaza’s center.

Below an anti-gay protester goes off.