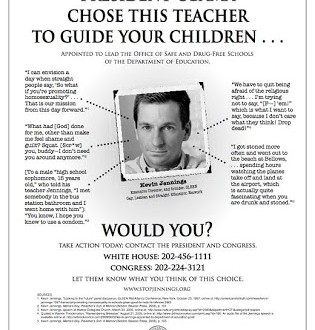 Tony Perkins’ Family Research Council has launched a website in their campaign to depose Kevin Jennings, the former Gay, Lesbian & Straight Education Network president who was appointed by Obama to head the Office of Safe & Drug-Free Schools. The campaign includes a full page ad in the Washington Examiner.

As the former president of the Gay, Lesbian, and Straight Education Network, Mr. Jennings worked tirelessly to bring the homosexual agenda into our nation’s classrooms, even in grades as young as kindergarten. In addition, in his autobiography, Mr. Jennings expresses no regret about his past drug abuse or recognition of its risks. Instead, he seems amused. In his words, “[W]atching the planes take off and land is actually quite fun when you are drunk and stoned.” Jennings has spoken publicly about a high school student he once counseled who was in a sexual relationship with an older man he met in a bus station – yet Jennings never reported this abuse to the authorities, the school, or the child’s parents. Family Research Council is launching www.stopjennings.org, to educate the American people about how Jennings’ dangerous views make him unfit to protect our nation’s schoolchildren. The website will also serve as an action center for those who will join us in calling on the President Obama and Congress to stop this appointment and put someone in this office who truly cares about schoolchildren – someone who would work to protect them from the very influences he seems to promote.

Jennings has also been subject of ridicule and attack on numerous rightwing blogs and news sites.