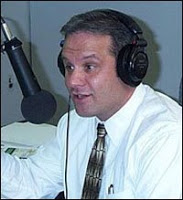 Deranged internet radio host Hal Turner, whom I have blogged about in the past, is under arrest for making death threats against gay Connecticut lawmakers.

Internet radio host Hal Turner — accused of inciting Catholics to “take up arms” and singling out two Connecticut lawmakers and a state ethics official on a website — was taken into custody in New Jersey late Wednesday after state Capitol police in Connecticut obtained a warrant for his arrest. Turner, who has been identified as a white supremacist and anti-Semite by several anti-racism groups, hosts an Internet radio program with an associated blog. On Tuesday, the blog included a post that promised to release the home addresses of state Rep. Michael Lawlor, state Sen. Andrew McDonald and Thomas Jones of the State Ethics Office. “Mr. Turner’s comments are above and beyond the threshold of free speech,” Capitol Police Chief Michael J. Fallon said in an e-mail announcing the warrant. “He is inciting others through his website to commit acts of violence and has created fear and alarm. He should be held accountable for his conduct.”

Turner became enraged when the above-named officials launched an investigation into whether the Catholic Church violated its non-profit status by staging rallies at the Connecticut state capitol to protest a proposed law changing how it was internally governed. On his blog Turner said, “It is our intent to foment direct action against these individuals personally. These beastly government officials should be made an example of as a warning to others in government: Obey the Constitution or die…If any state attorney, police department or court thinks they’re going to get uppity with us about this, I suspect we have enough bullets to put them down, too.”