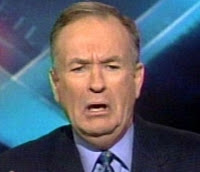 After Dr. George Tiller was murdered in his church yesterday, all eyes turned to Bill O’Reilly, who has railed against Tiller on his show 28 times since 2005. Via Salon:

But there’s no other person who bears as much responsibility for the characterization of Tiller as a savage on the loose, killing babies willy-nilly thanks to the collusion of would-be sophisticated cultural elites, a bought-and-paid-for governor and scofflaw secular journalists. Tiller’s name first appeared on “The Factor” on Feb. 25, 2005. Since then, O’Reilly and his guest hosts have brought up the doctor on 28 more episodes, including as recently as April 27 of this year. Almost invariably, Tiller is described as “Tiller the Baby Killer.” Tiller, O’Reilly likes to say, “destroys fetuses for just about any reason right up until the birth date for $5,000.” He’s guilty of “Nazi stuff,” said O’Reilly on June 8, 2005; a moral equivalent to NAMBLA and al-Qaida, he suggested on March 15, 2006. “This is the kind of stuff happened in Mao’s China, Hitler’s Germany, Stalin’s Soviet Union,” said O’Reilly on Nov. 9, 2006. O’Reilly has also frequently linked Tiller to his longtime obsession, child molestation and rape. Because a young teenager who received an abortion from Tiller could, by definition, have been a victim of statutory rape, O’Reilly frequently suggested that the clinic was covering up for child rapists (rather than teenage boyfriends) by refusing to release records on the abortions performed.

The piece concludes: “O’Reilly didn’t tell anyone to do anything violent, but he did put Tiller in the public eye, and help make him the focus of a movement with a history of violence against exactly these kinds of targets (including Tiller himself, who had already been shot). In those circumstances, flinging around words like “blood on their hands,” “pardon,” “country club” and “judgment day” was sensationally irresponsible.”