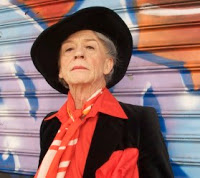 Outspoken, outlandish and utterly unwilling to conform, legendary Quentin Crisp’s tale is the tale of homosexuality in the 20th century. Commonly accepted as the first “out” man in Britain, Crisp’s 1968 biography inspired the 1975 award-winning TV film The Naked Civil Servant, starring John Hurt. But when it comes to the flamboyant performer and king of social commentary, one film could never have been sufficient. An Englishman in New York (starring Hurt in a reprisal of the role) chronicles the latter third of the icon’s life. Where The Naked Civil Servant was about Quentin’s going against the heterosexual grain in the UK, Englishman is the converse, a moving tale about a man who still refuses to follow the rules, even within the budding gay culture of the 1970s and ’80s in New York. Britain’s most famous homosexual sashays stateside with the help of Manhattan agent Connie Clausen (the always amazing Swoosie Kurtz), who gets Quentin resident alien status based on his “unique qualities.” Along the way, Connie finds Quentin a film review gig at The Village Voice and highly entertaining friendships are formed with New York’s bohemian set, played by Denis O’Hare, Jonathan Tucker (who played Tilda Swinton’s gay son in The Deep End), and Sex and the City’s Cynthia Nixon.

Enter to win two tickets to the opening night screening of An Englishman In New York and the gala after party by commenting on this post. Only enter once and please remember to leave your email address in the text of your comment. Entries close at midnight on Wednesday, Pacific time. If you cannot be in San Francisco on Thursday, your winning entry is transferable to your favorite local film buff. Publicists: If you’d like to take part in Swag Tuesday on JMG, please email me.