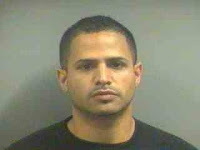 Queens Internet Killer Confesses:
I Killed Him Over My Hooker Fee Alexys Fermaintt, 30, yesterday confessed to the Queens stabbing death of Michael Pecora, 38, telling prosecutors that he acted in self-defense after Pecora attacked him with a knife in a dispute over Fermaintt’s escort fee.

Fermaintt told authorities that he had met Pecora online and had agreed to have sex and spend the day with him for money. Fermaintt is charged with second-degree murder and may spend 25 years to life in prison if convicted.

Last week after I located Fermaintt’s MySpace and YouTube accounts under the screen name Rican2Crave, blogger Rod McCullom uncovered an amateur sex video (NSFW) featuring Fermaintt and three other men in which he appears to be smoking crystal meth.

Previous Cooper: I Was At Studio 54 With Michael Jackson When I Was 10 Years Old
Next Daily Grumble