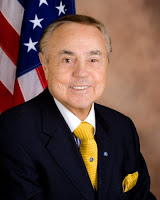 NY Daily News is reporting that Queens Democratic Sen. George Onorato may be ready to flip his vote on marriage equality to “yes.” Onorato’s Queens office has been the subject of a nightly vigil by equality activists.

But the same NYDN story also expresses doubt that anything will actually happen in the state Senate today.

Now the Senate Democrats are warring with Paterson over whether he sent yesterday’s bills up to the chamber in a timely fashion and if those bills were legal. It’s unclear if they’ll even show up for today’s extraordinary session, much less vote on anything. You’ve got to believe that Paterson knew darn well that trying to force the gay marriage issue would send Diaz Sr. over the edge; it’s not as if the senator has been keeping his opposition to the measure a secret. So what the end game is here is something of a mystery. Does the governor really want a marriage vote? Or is he just trying to have it both ways – preserve the fragile 31-member Senate Democratic conference while also maintaining his relationship with deep-pocketed gay donors?

And round and round we go. Previous Ex-Gay Preacher Not So Ex-Gay
Next Barclays Presents: The D Train