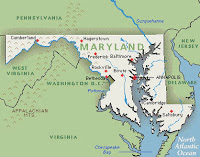 The attorney general of Maryland is looking into allowing the state to recognize same-sex marriages from other jurisdictions.

Maryland law defines marriage as a union between a man and a woman. But the state also sticks to a long-standing legal principle that generally acknowledges couples married elsewhere. Attorney General Doug Gansler’s office is expected to issue an opinion in the coming weeks. A spokeswoman for Gansler declined to comment while the matter is being researched. Gansler, a Democrat, supports gay marriage, while Democratic Gov. Martin O’Malley wants the state to adopt civil unions.