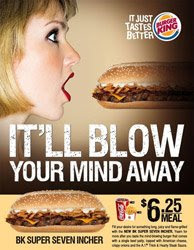 Burger King’s ad for their “super seven incher” is being described by Entertainment Weekly as “the day that subtlety died.”

As you can see here, the woman in said advertisement is about to go down on said Super Seven Incher with a suggestive tagline that uses the word “blow.” Mmhmm, I think it’s safe to assume that such humor will only be going over the head of those younger than, oh, about 13 years old. (Sorry, parents!) The “copy” at the bottom of the ad — not sure that you can even seen it here — takes the whole thing even further: “Fill your desire for something long, juicy and flame-grilled with the NEW BK SUPER SEVEN INCHER,” it says.

Flame-broil scented body spray, the creepy King, Facebook apps, and now this. Somebody at BK’s agency is doing a really good job of keeping them in the news. But they’ll never, ever top Subservient Chicken.