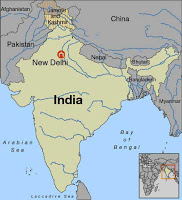 Balloons, whistles, masks, flags, placards and a riot of colours marked the second Delhi Gay Pride Parade, which went down the Barakhamba Road to Jantar Mantar. And for a show of solidarity, more than a 1000 strong crowd congregated at the venue. Their demand, though, was the same as it was last time: Do away with Article 377 from the lawbooks, and stop making homosexuality a punishable offence. Slogans like ‘377 Bharat Chhodo’, ‘Lesbian, Bisexual, Transgender and Gay’, and ‘Down down down down – 377 down down’ rent the air as the police kept a casual check on the marchers, assuring that no traffic situations were created and that no anti-social elements jumped in to ruin the mood of the parade.

The march was also attended by supportive straight Indian celebrities.