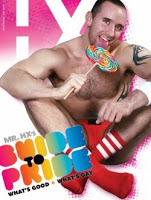 In yet another sign of the woes of LGBT print media, HX Media, owner of the New York Blade (among other properties), has sold its namesake title, HX Magazine, the famed weekly guide to Gotham’s gay nightlife. An investment fund that owns a stake in HX Media was forced into receivership in February.

“HX Magazine and the web site hx.com have been sold. The new owners of HX Magazine will be releasing details and information on their plans for the future of the title shortly. In the meantime, Bank and HX Magazine Publisher Gary Lacinski will be assisting them in the transition. HX Magazine issue 931 dated July 10th, which will be released on July 3rd, will be the last one produced by HX Media and its staff.”

When I first started visiting Manhattan on clubbing excursions in the early 90’s, I’d borrow copies of the first incarnation of HX, the folded/stapled Homo Xtra, and try to memorize bar addresses on the flight up from Miami. Let’s hope that at least some of the current staffers hold onto their jobs under the new owners.