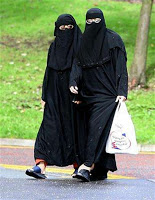 President Nicolas Sarkozy has joined a coalition of French legislators calling for a ban on the wearing of burqas.

“The issue of the burqa is not a religious issue, it is a question of freedom and of women’s dignity,” Sarkozy said. “The burqa is not a religious sign, it is a sign of the subjugation, of the submission of women. I want to say solemnly that it will not be welcome on our territory.” His remarks won strong applause from legislators during a wide-ranging speech at the grandiose Palace of Versailles. France, home to Europe’s largest Muslim minority, is divided over how to reconcile secular values with religious freedom. Many see the burqa as an infringement of women’s rights and say it is being imposed on many Muslim women by fundamentalists. “We cannot accept that some women in our country are prisoners behind a grille, cut off from social life, deprived of their identity,” Sarkozy said.

Muslim activists warned that the ban could backfire, trapping women in their homes if they could not appear in public in a burqa.