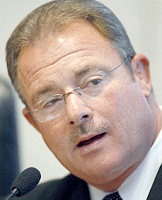 Yesterday, Father’s Day, former pro wrestler and current Florida politician Brian Blair, who campaigned against the Day Of Silence, silenced his two children by beating and choking them.

Blair, 52, was arrested shortly after 5 a.m. after an altercation at his family’s home in the Forest Hills area of Tampa, sheriff’s Deputy Larry McKinnon said. Blair and his wife, Toni, have two sons, Brett and Bradley, according to his campaign Web site. Blair, a former professional wrestler who is 6 feet tall and weighs 235 pounds, pushed his older son Brett, 17, in the chest about 4 a.m., according to an arrest report. The teen tried to walk away, but Blair grabbed him and punched him in the face with a closed fist, leaving a red mark and swelling, the arrest report said. Blair then put the 17-year-old in a choke hold, causing him to have trouble breathing, according to the report. Deputies said Blair then let go of his older son and grabbed his younger son by the throat. He punched the boy, leaving a bump on his head, the arrest report said. In the report, a deputy gave the younger son’s age as 12, though Blair’s campaign Web site said he is 13. Both sons identified their father as the person who attacked them, deputies said.

In addition to promoting the bullying of gay students, Blair endorsed Florida’s ban on same-sex marriage and voted to ban recognition of gay Pride events. Blair doesn’t want homos to impose their “social and sexual agenda upon the rest of us and especially, on our children.” But he’s clearly OK with imposing his hands around the throats of his own kids.