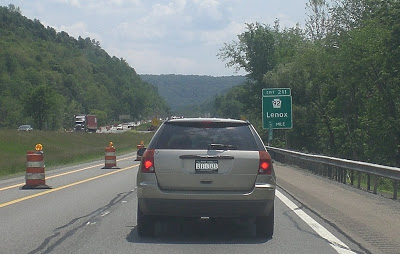 New York driver, we SAW you dump your fast food garbage into the middle of I-81 at milepost 213 in the Endless Mountains of Pennsylvania, you thoughtless pig. If our rental had been equipped with a laser-guided missile, the road crews would be picking up your body parts as well as your fucking Arby’s trash.

UPDATE: Some wacko “devoted and daily” JMG reader has been sending me increasingly deranged emails, threatening to “make me sorry” for this post. While I’m not all at worried about the legality of posting a photo of a vehicle on an interstate highway (there are several NY-based sites exclusively devoted to posting photos/license plates of drivers committing illegal acts, not to mention numerous Flickr groups), I have blurred the photo so my “devoted” reader gets no satisfaction in contacting the driver, should he figure out how.

Previous Marriage Rally In Rhode Island
Next The 2009 Tony Awards