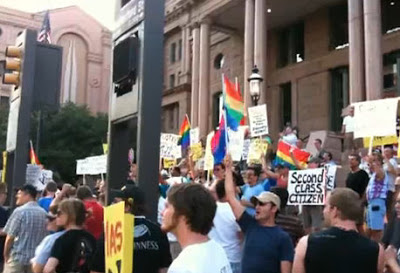 Up to 200 people protested outside of Ft. Worth’s police headquarters yesterday after a Saturday raid on a gay bar brought charges of harassment and brutality by police. One patron was hospitalized with a brain injury. Arrests were made for “public intoxication”…inside of a bar.

Witnesses say that police arrived at the nightclub about 1 a.m. Sunday and arrested seven people and that one of those arrested suffered a fractured skull during the takedown and is at a Fort Worth hospital. About 75 people showed up Sunday afternoon at the Rainbow Lounge to make signs for the rally. Some of the signs read: “Give us Answers Now” and “We Have Rights Too.” Fort Worth police released a statement saying that the Rainbow Lounge was not the only bar targeted by six Fort Worth police officers and two agents from the Texas Alcoholic Beverage Commission and a supervisor. The group first went to the Rosedale Saloon and Cowboy Palace on Rosedale Street. Nine people were arrested, police report. The investigators then went to the Rainbow Lounge, where seven arrests were made, the police statement said. While walking through the Rainbow Lounge, an “extremely intoxicated patron made sexually explicit movements toward the police supervisor,” the statement said. This individual was arrested for public intoxication. “Sexually explicit movements”? Groping the arresting officers? Are they serious?