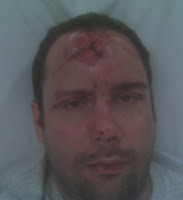 The NYC Anti-Violence Project is investigating the case of a gay man who was viciously beaten yesterday by a group of men who called him a “faggot.” The incident happened on the usually sedate Upper East Side. The Village Voice reports:

Joe Holladay, in town on business, was jumped and beaten Saturday morning by a group of men who called him a faggot. Holladay tells us that he walked out of John Jerome’s apartment on East 85th Street between York and East End Avenues, where he’d been staying, at about 4 a.m. to smoke a cigarette on the sidewalk, and five or six young men swarmed him. “It’s very blurry,” he says, “But yeah, they said ‘faggot.’ And the next thing I know I’m in the hospital.” Jerome, an acting coach, heard the fracas and came downstairs to find his friend “in a pool of blood. I thought he was dead. He wasn’t moving.” Jerome says neighbors in the building told him, and the police, that they saw a group of five or six young white men “with crewcuts, wearing wife-beaters” smoking pot outside the building just before the incident — and, drawn to their window by the noise when the beating occurred, heard the anti-gay epithets and saw the young men pile into a car and drive away.

Holladay has been interviewed by NYPD detectives and has been released from the hospital. According the Voice, Holladay and his friend were threatened with arrest themselves when they vehemently argued with police that the case should be treated as a hate crime.