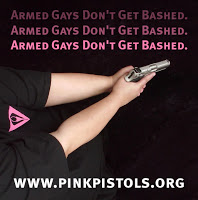 The Washington Independent is reporting that an amendment allowing gun owners to carry their concealed weapons across state lines may be attached to the Matthew Shepard Act, the Senate’s hate crimes bill. The spurious reasoning: It will protect gays from bashing. Yeeeeah. And GOProud nutter Jimmy LaSalvia one of the people behind it.

One month after successfully tucking an amendment into the credit card reform bill that expanded gun rights, a small number of Senate Republicans are looking at the Matthew Shepard Hate Crimes Prevention Act as another chance to score a victory for the Second Amendment. The possible plan — to add an amendment that would allow gun owners to carry their weapons from one state to another in accordance with concealed carry laws. The possible rationale — to defend gay rights. “It makes sense for a group of people who would be protected by hate crime legislation to support something that would let them defend themselves before or after the crime,” said one Republican Senate aid familiar with the discussions. “It’s relevant, and we want to work together with gay groups to get the message out.”

While the aide described the discussions over a gun rights amendment to the hate crimes bill as “very fluid,” conservative and pro-gun rights gay groups outside of the Senate are ready to make a real push for it. GOProud, a new gay rights group that broke away from the Log Cabin Republicans in April, has talked with top staffers for Sen. Tom Coburn (R-Okla.) and Sen. John Thune (R-S.D.) about how to make the civil rights case for conceal and carry reciprocity. “We support this because we think it’s advantageous to make it legal and relatively easy for gay people to arm themselves so they can protect themselves,” said Jimmy LaSilva, who became the executive director of GOProud after three years working on policy for the Log Cabin Republicans. “In the next few weeks we want to start highlighting some of those stories. There are people who have averted gay bashings because of their ability to use guns.”

“Self-defense with a firearm is a valid and viable method of self-defense and protection,” said Gwen Patton, a spokesperson for Pink Pistols. “Imagine that individuals follow you from a place known in the neighborhood as a GLBT gathering place. They follow you to your car, and when you try to open the door, they hold out pipes and yell — ‘Hey, faggot!’ You pull out a concealed weapon that you have a license to carry. They say, ‘He’s got a gun!’ They drop their pipes and run away. No shots were fired, but a beating was just averted.”

LaSalvia claims that attaching this gun law to the hate crimes bill would give GOP Senators cover for voting on a gay rights bill. “I was voting for the right to carry my hidden revolver across state lines!” But holy cow, this sounds like the 2007 disaster all over again, connecting the hate crimes act to something that the Dems cannot support. This bonkers idea makes attaching the bill to defense appropriations actually sound reasonable.

UPDATE: There’s some interesting commentary on this idea over at Huffington Post.