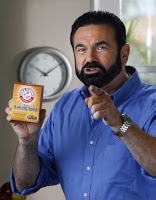 Bear and advertising icon Billy Mays was found dead in his family home early Sunday at the age of 50. Family members say that Mays reported hitting his head during a rough commercial US Airways landing the day before and had said he wasn’t feeling well afterwards.

It was unclear whether the bumpy landing contributed to Mays’ death, but he complained about not feeling well before going to bed. “All of a sudden as we hit, you know, it was just the hardest hit, all the things from the ceiling started dropping,” Mays told Fox 13 in Tampa. “It hit me on the head, but I got a hard head.” He wrote on Twitter: “Just had a close call landing in Tampa. The tires blew out upon landing. Stuck in the plane on the runway. You can always count on US Air.” Mays’ wife, Deborah, found him in bed at their home and called 911 when she couldn’t revive him around 7:45a.m. Tampa police said there were no signs of foul play. Police spokeswoman Laura McElroy said any connection between the rough landing and Mays’ death would “purely be speculation.”

Just two week ago I reported that a bill had been introduced in Congress to force television stations to reduce the volume on commercials by shouting pitchmen like Billy Mays. It’s been a bad week for celebrities, hasn’t it?

UPDATE: A preliminary autopsy shows that Mays probably died from heart disease, not from a bump to the head.