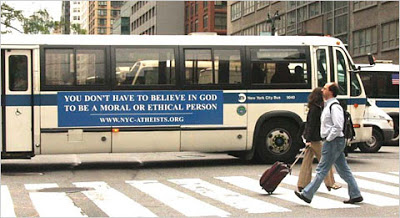 The New York commercials were inspired by the first Atheist Bus Campaign in London last January. They were put on 800 buses in response to a campaign by a Christian group whose relatively innocuous messages contained a URL for a Web site that warned that nonbelievers would “spend all eternity in torment.” The New York messages are not in response to any such statements, but merely intended to build on what creators believe was the success of the London campaign. Mr. Bronstein said it was something of a challenge to draft a message that the Metropolitan Transportation Authority in New York deemed acceptable. “I had to be very careful in what they would accept,” Mr. Bronstein said. It took time “to find a statement that we thought was positive, it wasn’t bashing religion and it wasn’t huge.”

A spokesperson for the New York Catholic Diocese said he has no problem with the campaign, citing free speech. The ads were paid for by an anonymous donor and will run on city buses for one month. Visit NYC Atheists for more information.