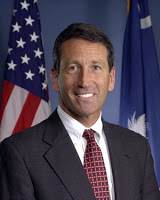 The interwebs has been buzzing for days over the mysterious disappearance of South Carolina Gov. Mark Sanford, who ditched his security detail and went missing for a week. After claims that he’d been out “hiking the Appalachian Trail” (snork!), the truth comes out. Sanford had been in Buenos Aires visiting his mistress.

South Carolina Gov. Mark Sanford says he’s been having an affair and will resign as head of the Republican Governor’s Association. The married father of four emotionally apologized to his wife, staff and others after returning today from a trip to Argentina that followed a days-long absence. His staff had said the Republican was hiking on the Appalachian Trail. He had been a rumored contender for the 2012 GOP ticket. A former congressman, he’s most recently snared headlines for his unsuccessful fight to turn aside federal stimulus cash for his state’s schools.