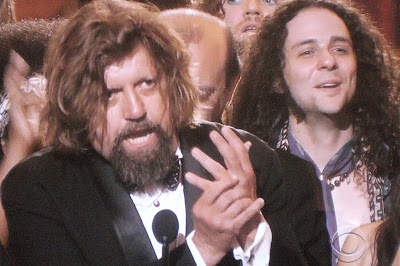 What a strange beast was this year’s Tony Awards. The “most expensive opening ever” (above left) was indeed spectacular – but audio problems abounded. But hey, we did get to hear the sound of Bret Michaels’ head smacking into a lowering backdrop. (Yeah, I replayed that one a few times.) Neil Patrick Harris was an affable, if underutilized host, white knots were everywhere, Gavin Creel and the cast of Hair ripped the roof off Radio City (above right), and Alice Ripley gave the strangest, scariest, most pompous acceptance speech this side of Phylicia Rashad. The winners:

The show ran a few minutes long, meaning a lot of your DVRs didn’t catch what for me was the highlight of the entire production, Neil Patrick Harris’ hilarious musical recap of the evening. Amazingly, he was able to memorize lines about things that had only occurred minutes earlier. And major points to the song’s writers for acknowledging the over-the-top gayness that is the Tonys.

Previous Daily Grumble
Next This Week In Holy Crimes