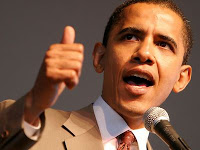 Where Is Our “Fierce Advocate”? Today the New York Times wonders when our president, who promised to be a “fierce advocate” for LGBT causes, is going to step up to the plate.

President Obama was noticeably silent last month when the Iowa Supreme Court overturned the state’s ban on same-sex marriage. But now Mr. Obama — who has said he opposes same-sex marriage as a Christian but describes himself as a “fierce advocate of equality” for gay men and lesbians — is under pressure to engage on a variety of gay issues that are coming to the fore amid a dizzying pace of social, political, legal and legislative change. Two of Mr. Obama’s potential Supreme Court nominees are openly gay; some advocates, irked that there are no gay men or lesbians in his cabinet, are mounting a campaign to influence his choice to replace Justice David H. Souter, who is retiring. Same-sex marriage is advancing in states — the latest to allow it is Maine — and a new flare-up in the District of Columbia could ultimately put the controversy in the lap of the president. Mr. Obama’s new global health initiative has infuriated activists who say he is not financing AIDS programs generously enough. And while the president has urged Congress to pass a hate crimes bill, a high priority for gay groups, he has delayed action on one of his key campaign promises, repealing the military’s “don’t ask, don’t tell” rule.

On Monday the president tried to allay the growing fears of abandonment and invited reps from major LGBT organizations to the White House for a chat. Afterwards, the HRC’s Joe Solmonese emerged to say, “They have a vision. They have a plan.”

Previous Trippin’ On The Moon!
Next Michael Savage To Sue UK Over Travel Ban