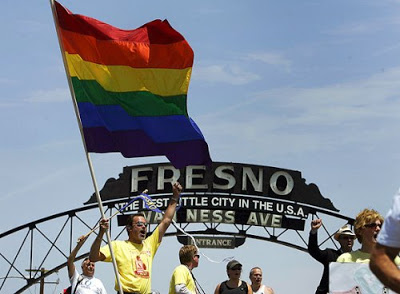 An estimated 3000 activists rallied in California’s heartland yesterday for the Meet In The Middle 4 Equality event, which was preceded by a 14-mile march from the symbolically chosen town of Selma.

With lively chants and rainbow flags, several thousand people rallied in Fresno today, aiming to persuade California’s conservative heartland to support same-sex marriage rights. Just days after the California Supreme Court upheld a ban on same-sex marriage approved by voters in November, activists launched the rally with a 14.5-mile march from Selma to Fresno in the Central Valley. Hundreds participated in the march. Seeking to link the march with the 1960s civil rights movement centered in places like Selma, Ala., organizers said it was “a symbolic sign of respect for the social movements before us.”