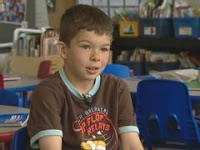 Well, the Freepers are all OVER this one.

A Denver third-grader will be front and center at the Colorado State Capitol Saturday pushing for same sex marriage in the state. Ethan McNamee arranged the rally as an independent class project. He was concerned about the issue after hearing about anti-gay remarks on the playground and then learning about a same sex couple in his neighborhood that couldn’t get married. “Everybody is different in a good way,” he said. Ethan believes that if two people love each other that is the only issue to be considered. Ethan took it upon himself to arrange the rally and line up the guest speakers. He admitted it was more work then he thought it would be, but adds it was fun. Administrators at Montclair Elementary have been sensitive to the controversial issue. Parents were notified about Ethan’s project and only students who wanted to get involved participated. A handful of kids helped Ethan make signs on Friday afternoon.

Ethan has already lined up speakers from The GLBT Community Center of Colorado, PFLAG and other organizations, and can rattle them off when asked. He’s contacted Mayor John Hickenlooper — he can’t be there — and Senator Michael Bennet, who Ethan thinks is trying to give him the runaround. “I e-mailed him tons of times. I called him a couple times. I confronted him personally,” Ethan says, sounding exasperated. “He never gave me a straight answer.”

Freepers:
– “poor kid is likely to be scoped out by pedophiles nationwide with this type of publicity”
– “I am happy the Russians beat the hell out of those fag activists. ‘Cause this is what will head down their way in the future if they don’t stop it now.”
– “More proof that statists, liberals, and homosexuals have no problem abusing children to promote their agenda.”
– “He is a tool pervertedly used by the homo-activist machine.”
-“Awwwww, isn’t that touching? Such a good little Hitler Youth.
-“Propaganda and brainwashing in our society and schools has led to this.”

I’d like to point out that there were tons of small kids at yesterday’s anti-gay evangelical rally. “Propaganda and brainwashing”, indeed.