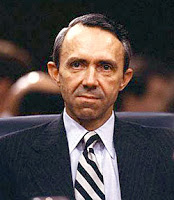 Sources close to Supreme Court Justice David Souter have revealed that he will retire at the entire of the Court’s current term. The sources say that he will remain in office until President Obama selects his replacement.

Factors in his decision no doubt include the election of President Obama, who would be more likely to appoint a successor attuned to the principles Souter has followed as a moderate-to-liberal member of the court’s more liberal bloc over the past two decades. In addition, Souter was apparently satisfied that neither the court’s oldest member, 89-year-old John Paul Stevens, nor its lone woman, Ruth Bader Ginsburg, who had cancer surgery over the winter, wanted to retire at the end of this term. Not wanting to cause a second vacancy, Souter apparently had waited to learn his colleagues’ plans before deciding his own.

Souter was appointed by Bush I in 1990 but to the president’s dismay, Souter joined the liberal voting wing of the Court. Some are speculating that Obama will select a second woman to join Ruth Bader Ginsberg on the nine-member panel.

Previous Deeeeelicous!!!!
Next Foxx’s “Apology” Lands Her Back At #1