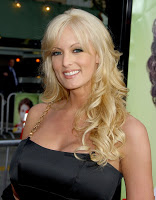 Stormy Daniels strode onstage at a downtown Baton Rouge restaurant in a tight black blouse with a plunging neckline and a knee-length skirt in the popular purple of Louisiana State University. She introduced herself with a warning. “For those of you who don’t know who I am,” she told the lunch crowd at The Roux House, “I’d suggest that you don’t Google that until you get home from work.” She’s a Louisiana-born porn star who says she is considering a 2010 run for the U.S. Senate seat currently held by Republican David Vitter, whose family-values reputation was marred in 2007 when his name was linked to a Washington prostitution ring.

According to hookers in the employ of the now-suicided DC Madam, Vitter enjoys adult baby roleplaying including wearing diapers. He also enjoys railing against the expansion of LGBT rights.