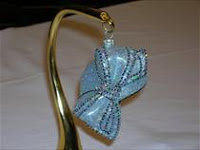 The hat that dazzled millions of people during the inauguration of President Barack Obama, is now being offered as a Christmas ornament. Aretha Franklin’s stylish big-bowed hat was the inspiration for the glittery-glass ornament. The ornament’s designer hopes it too will be a big fashion hit. Curtis Posuniak is the brain-child behind the ornament. He says the minute he saw Aretha’s hat he knew he wanted to make a tiny glass version of it. They will cost $43 a piece and will be sold at gift shops and by email.