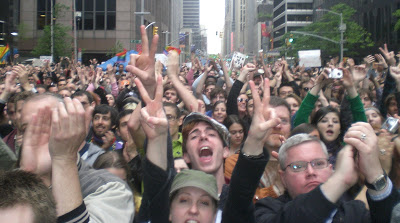 New York Gov. David Paterson and NYC Mayor Michael Bloomberg were only two in a galaxy of stars of stage and politics to join thousands of New Yorkers in today’s marriage equality rally just off Times Square. The event was seamlessly produced by Broadway Impact, who are due huge congratulations for pulling the whole thing off in just ten days. I spent most of the afternoon backstage or in the press pit and got some great shots for the below slideshow.

Among the many inspiring speakers were newly engayged Sex In The City star Cynthia Nixon, newly engayged Assemblyman Danny O’Donnell, state Sen. Tom Duane, Bloomberg, Paterson, and Empire State Pride Agenda executive director Alan Van Cappelle. The cast of Hair performed two great numbers lead by openly gay star Gavin Creel, hunkster heartthrob Cheyenne Jackson sang, and Tony winner Audra McDonald brought the house down to close the day. It was a fantastic afternoon and totally the homo antidote to all the evangelical bigotry we had experienced just a few blocks away. Full-screen versions of the photos below are here.