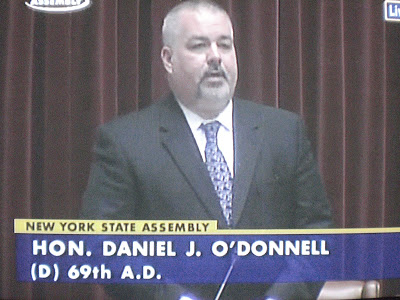 FINAL: The New York Assembly has passed Daniel O’Donnell’s marriage equality bill by a vote of 89-52. This win was never really in doubt, but the debate still proved riveting – both rancorous and beautifully moving. Congratulations to all and a big thank you to Danny! UPDATE: The debate on the floor has begun. Daniel O’Donnell is at the podium defending the bill.
UPDATE II: You really should be watching this. O’Donnell is going OFF on Assemblyman Fitzpatrick.
UPDATE III: Openly gay Assemblyman Matthew Titone (pictured above) has delivered a heartbreakingly beautiful plea for equality.
UPDATE IV: Assemblyman Dov Hikind (D-BK) is a vile creature. He just diminished anti-gay discrimination, saying that the Holocaust was REAL discrimination. Hikind represents Boro Park, one the largest Orthodox Jewish communities in the world outside of Israel.
UPDATE V: Assemblyman Benjamin (who is black) seems to object to comparing gay rights to civil rights. Benjamin: “Mr. O’Donnell, was it homosexuals or Africans who were brought to this country in slave ships?” O’Donnell: “I’m sure BOTH as I’m sure some of those Africans were homosexual.” Benjamin: “Touche’.” O’Donnell’s response prompted the chair to order the gallery to stop laughing.
UPDATE VI: Holy crap. I would totally gay marry Assemblyman Andrew Hevesi. What a great straight champion we have in him.
UPDATE VII: Assemblyman Phil Boyle (R) supports marriage equality but opposes the bill, because he thinks New York “should be the first state in the country to legalize gay marriage by public referendum.” He thinks Prop 8 succeeded because the people of CA felt “imposed upon.”
UPDATE VIII: So far two GOP lawmakers have announced they are reversing their 2007 votes to support the bill.
UPDATE IX: Assemblyman Mark Weprin: “I wanna be able to tell my kids and my grandkids that I was part of history. I wanna be able to say ‘I was THERE when Danny O’Donnell passed marriage equality in this Assembly.'”
UPDATE X: Assemblywoman Eileen Dugan: “While I am straight, I am proud to go gaily foward and vote in the positive.”
UPDATE XI: My assemblyman, openly bisexual Micah Kellner just shot the hell out of the previous speaker who said that bill discriminates against bisexuals “because they can’t marry both a man AND a woman.” Kellner: “I’ve only been involved in relationships with ONE person at a time.”
UPDATE XII: Assemblyman Hakeem Jeffreys: “Civil rights heroes did not die simply so only African-Americans would be free.”
UPDATE XIII: Closing arguments. GOP Assemblyman Teresa Sayward says “science leads us to the truth. Homosexuality is not a sickness or a sin. My son should not be denied his rights.”
UPDATE XIV: O’Donnell thanks his supporters and talks about his family’s history in Ireland. “My grandmother was a daily communicant, but she CHOOSE to come to this secular nation. We put our hand on the Bible and swear to uphold the Constitution, not the other way around.”

The New York Assembly will convene at 3PM today to vote on A07732, its marriage equality bill. NYC-area residents can watch the proceedings live on Time-Warner channel 159 and on Cablevision channel 116. Watch live online here.