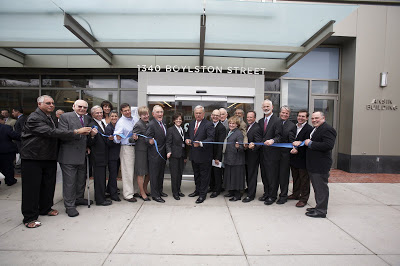 Fenway Health in Boston has opened what is thought to be the largest building ever built for a LGBT organization.

Boston Mayor Thomas M. Menino cut the ribbon as Fenway Health officially named its new 1340 Boylston Street home The Ansin Building at a ceremony attended by 200 people on Thursday, May 7. The 100,000 square foot, $60 million facility, generously named by Ron and Ed Ansin in loving memory of Peter Ansin (1957 – 1992), is believed to be the largest facility ever constructed by an organization with a specific mission to serve the lesbian, gay, bisexual and transgender (LGBT) community. Speakers at the dedication ceremony included the Mayor, Beth Israel Deaconess Medical Center President Paul Levy, City Council President Mike Ross, Representative Byron Rushing, philanthropist and Fenway donor Ron Ansin, developer Steve Samuels and Fenway Health President and CEO Dr. Stephen Boswell. In a moving speech, Mayor Menino credited Fenway with saving the life of a close friend who had struggled with the fact that he was gay. “[Fenway] gave him all the support in the world, right here, and that’s what they do every day. They save people’s lives,” the Mayor said.