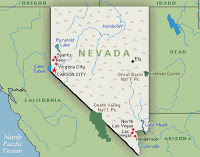 Yesterday the Nevada Senate overrode Gov. Jim Gibbons’ veto of their domestic partners bill by a 14-7 vote, exactly the number needed for the required two-thirds majority. The bill originally passed 12-9, but two Republicans changed their vote with one citing lobbying from the casino industry as his reason. Go Jan Jones! The bill now goes back to the Assembly where two changed votes are also needed to override.

RELATED: Gibbons has earned the title “Gov. Veto,” setting a record for the most bills vetoed by any governor since Nevada became a state in 1864,