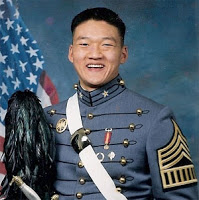 The Courage Campaign has nearly 120,000 signatures on its “Don’t Fire Dan Choi” petition.

Lt. Dan Choi, from Orange County, California, is a graduate of the U.S. Military Academy at West Point and an Iraq War veteran. Last March he went on Rachel Maddow’s show and spoke three truthful words: “I am gay.” As a result Lt. Choi received a letter from the Army on April 23 discharging him for violating the “Don’t Ask, Don’t Tell” policy. He told Rachel Maddow the letter was “a slap in the face” to himself and the soldiers he as commanded and served with over the past decade. Lt. Choi is fighting to stay in the military and ensure that no other soldier is ever again discharged as a result of “Don’t Ask, Don’t Tell.” The Courage Campaign and CREDO Mobile are joining his effort to secure equality in our armed forces. President Obama did not create this policy. But he now has the opportunity to keep his promise and allow gay and lesbian soldiers to serve openly in the military. It’s the right thing to do — for justice and for national security.