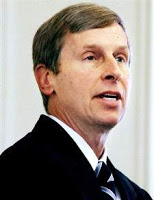 New Hampshire Gov. John Lynch has announced that he will sign the marriage equality bill if the legislature approves new language.

At 2:15 this afternoon, New Hampshire Governor John Lynch announced that he will sign his state’s gay marriage bill, making New Hampshire the sixth state in the union to legalize same-sex marriage. However, he wants the Legislature to make additional changes, according to New Hampshire Public Radio. Those changes are not yet available, but we will publish them as soon as they are. The much-anticipated news comes eight days after both Houses of the General Court passed the legislation approving marriage equality.

UPDATE: Lynch says he wants “stronger religious protection” language like that in Vermont and Connecticut where churches are specifically exempted from performing same-sex ceremonies if they hate homosexuals.

UPDATE II: Here is the governor’s official statement. The new language he is requesting only applies to religious institutions, not private businesses.

Previous Pet Shop Boys – Did You See Me Coming?
Next Free Viagra For The Unemployed