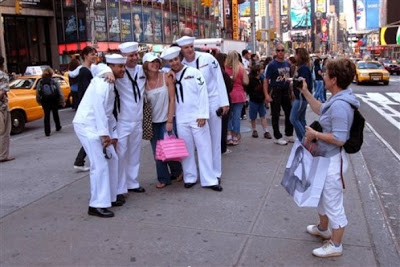 NYC’s Fleet Week begins today, but times are hard even for the military.

Some 13 warships and other craft are sailing into New York Harbor this week for the annual observance of Fleet Week. The annual naval review that starts Wednesday is a sparse gathering compared to past years, with only three major U.S. combat vessels in the lineup. That’s the smallest contingent in Fleet Week’s 22 years. Navy spokeswoman Lt. Lesley Lykins says the service is trying to cut costs this year. The largest and most familiar vessel slated to parade up the Hudson River this year is the USS Iwo Jima, named for the bloody 1945 battle. The missile cruiser USS Vella Gulf and missile destroyer USS Roosevelt will also make an appearance.

The parade of ships sails up the Hudson this morning, after which an expected 20,000 sailors will have several days of shore leave. Manhattan’s titty bars are gearing up.