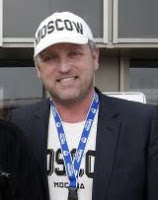 Russian gay activists have asked contestants at this weekend’s Eurovision Song Contest to boycott the finals if Moscow police attempt to interfere with the gay pride parade on that day. The lead singer of the Netherlands’ entry, The Toppers, is the first to agree.

Dutch singer Gordon has said he will boycott the Eurovision Song Contest if Moscow police use violence against gay rights activists. Gordon, whose real name is Cor Gordon Heuckeroth, fronts the band The Toppers along with Jeroen van der Boom and René Froger. They will be in the May 16th final if they make it through the selection rounds. He told NOS radio: “If people of my kind are being discriminated against in such a way, I have nothing to expect from this Russia, and I will be on the first plane home.” Russian gay rights movement leader Nikolai Alexeyev is planning to hold a gay pride march before the city hosts the Eurovision final. He has said he expects up to 500 people to join the parade, named Slavic Pride, despite official threats to close down any march.

RELATED: British gay activist Peter Tatchell will again be attending Moscow Pride, where he was brutally beaten in 2007 by anti-gay extremists while police stood by. After the attack Tatchell was arrested and held without charges. Police refused to seek his attackers despite photo and video evidence of their identities. You can follow Tatchell’s experiences at this year’s Moscow Pride on Twitter.