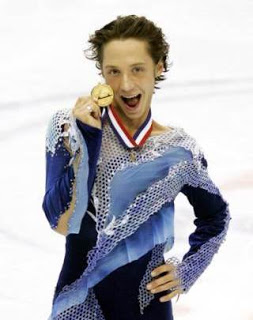 Canadian figure skating officials are looking for ways to butch up the sport in advance of the 2010 Vancouver Games.

“It’s just as tough as football,” said Canadian figure skater Jeremy Ten, ranked third in Canada. “We aren’t tackling each other, but we are hitting the ice pretty hard. We’re hitting the boards; we’re scraping our shins and cutting ourselves.” Along with the more masculine presentation, skating officials say it’s also time to throw away the frilly, sequin-clad outfits in favor of simpler, more uniform looks. The attempted rebranding of the sport has outraged many gay advocacy groups, who say it’s nothing more than a thinly veiled attack on skating’s sizable gay audience.

Skating officials say they are looking to draw a “hockey crowd” to the sport. Doesn’t seem very “thinly veiled” to me.