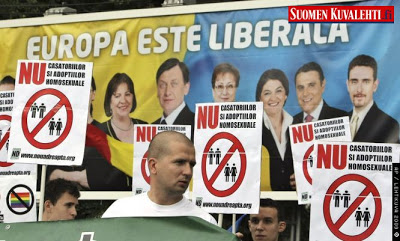 Skinheads and other charming Romanians marched in opposition to Bucharest’s gay pride parade yesterday, declaring their event a “Normality March.”

“Romanians, wake up! Sexual perversions are contagious mental diseases” or “Romanians, stop the homosexual epidemic! It is more dangerous than the flue” are just some of the messages written on the placards. The participants also chorus “Romania is not Sodom.” We have nothing against homosexuals, but it bothers us so see that they make public their options and attitudes that should remain private, one of the participants at the march told NewsIn. The organizers of the normality march said they will not try to sabotage the march of sexual minorities that will take place this afternoon at 5 p.m, and added they are just trying to express their points of view through this action, said Alexandru Nastase, the leader of Noua Dreapta Bucharest. This is the fourth year in a row when such a march is organized. According to a poll carried out by Gallup Organization Romania in June-July last year, homosexuality is seen as a bad thing by 68 percent of the Romanians. About 36 percent of them deem homosexual relations should be sanctioned, through prohibiting some rights. The same poll indicates that 56 percent of the Romanians say homosexuals should not be allowed to organize public events and 36 percent of them wish they would stop showing on television.

Although Romanian society is largely anti-gay, the country has made great strides in LGBT rights in recent years and in 2006 was lauded by the Human Rights Watch for making “exemplary progress in combating rights abuses based on sexual orientation or gender identity.” Gays can serve openly in the military (although few do), but same-sex relationships are not recognized by the state in any fashion.

Previous “Liberty” University Bans Democrats Because They May Support Dirty Homos
Next Unshocking: NYC Is Most Neurotic