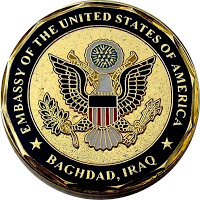 The U.S. Embassy in Baghad will be hosting a gay pride celebration which include a drag show. Meanwhile local gays continue to be rounded up and murdered. Insensitive?

Change has certainly come to Baghdad. And it appears that includes the U.S. Embassy, where they are holding what the invitation says is the first-ever U.S. Embassy Gay Pride Theme Party next Friday at Baghdaddy’s, which is the embassy employee association’s pub. “Come celebrate the start of Summer with color . . . and in costume!” the May 10 invitation says. “Dress in drag or as a gay icon. All are welcome.” The invitation was attached to what was called an “All Hands Alerts” e-mail. An embassy spokesman said by way of explanation: “This is an event organized and sponsored by a group of employees. Given the lack of places to meet in Baghdad, the embassy allows groups to use its social facilities for events on a first-come, first-served basis.” The invitation says, “Prizes will be awarded for two contests: Best Dressed Gay Icon and Best Lip Synch Performance.” Unclear what the prizes are, but don’t forget to “order costume supplies now in time for May 29th,” we’re told. “For more info and costume ideas, check out the next edition of The Tigris Times.”

While it’s definitely cool that a government agency of the United States is so open to a gay pride event on their premises, I’m a little bothered that there seems to be no acknowledgment of the plight of gay Iraqis.