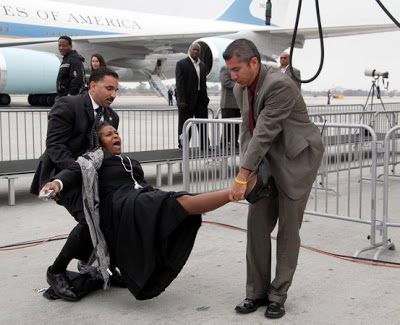 Anti-Gay “Journalist” Dragged Kicking And Screaming From Air Force One The Secret Service had to drag Georgia-based “journalist” Brenda Lee (!) away from Air Force One in Los Angeles today when she refused to leave, saying she had to personally deliver a letter to the president urging him “to take a stand for traditional marriage.” Lee, who claims she has White House press credentials, said she writes for the Georgia Informer, a Christian website aimed at an African-American readership.

On the Georgia Informer site, however, Lee is identified as Rev. Brenda Lee, where so far I can only find an incomprehensible editorial by her in which she thanks God for not destroying California with an earthquake, despite all the wicked people living there. It also doesn’t look like the Georgia Informer site has been updated since last year. Is the good Reverend just another crazy Christianist liar, in addition to being a complete loon?

UPDATE: Ooh, it turns out her official title is Black Catholic Priestess Brenda Lee. From her Prop 8 post of last year:

GOD’S mercy is not everlasting. That is why there is death and hell. Californians will vote Yes on Proposition 8 to establish marriage between a man and woman or they will go down for their wickedness. In November voters all over the United States should demand that its political leaders reconfirm that the United State is a GOD fearing country or it will move closer to becoming a Third World Country. GOD will bring this country to its knees via natural disasters that will turn into financial disasters. From the presidential to local candidates, every politician who stands with and for gay marriage must be defeated in November. And then Americans must make it clear that the president and governors who nominate gay sympathizers to judgeships will be defeated in the next election.

Seriously, read it, it’s a hoot. She is so from Crazytown.

“On what grounds does Rev. Lee speak for GOD? Her credentials out weigh that of Benedict XVI and every other Christian, or religious leader in the world. They have not heard the VOICE of GOD and they do not have the gift of prophecy or healing. None are willing to meet her face to face and call upon the name of GOD, as of the days of old because they know that she ranks with John the Baptist and Saint Peter. “

Ooh, poppa tooney, we got us a looney. Please, please, please SNL – do something with this!

UPDATE: We have video! I almost fell off my chair at the audio.