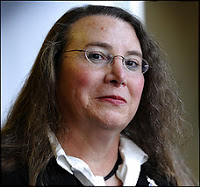 Former Army Special Forces commander Diana Shroer has won a $500K judgement from the federal government because she was denied a Library of Congress job while transitioning her gender.

Diane Schroer of Alexandria, Va., applied for the terrorism analyst job while she was still a man named David Schroer. He was offered the job, but the offer was pulled after he told a library official that he was having surgery to change his gender. U.S. District Judge James Robinson ruled Tuesday that Schroer was entitled to $491,190 in back pay and damages because of sex discrimination. The Library of Congress and the Justice Department argued unsuccessfully that discrimination because of transsexuality was not illegal sex discrimination under the Civil Rights Act. The American Civil Liberties Union had argued the case on Schroer’s behalf. Paul Cates with the ACLU’s Lesbian and Gay Rights Project said the ruling was significant because a federal judge said that discriminating against someone for changing genders is sex discrimination under federal law.

Another big win for the ACLU.