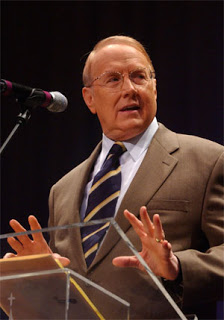 The above is the headline from the UK’s Telegraph.

Leading evangelicals have admitted that their association with George W. Bush has not only hurt the cause of social conservatives but contributed to the failure of the key objectives of their 30-year struggle. James Dobson, 72, who resigned recently as head of Focus on the Family – one of the largest Christian groups in the country – and once denounced the Harry Potter books as witchcraft, acknowledged the dramatic reverse for the religious Right in a farewell speech to staff.
“We tried to defend the unborn child, the dignity of the family, but it was a holding action,” he said. “We are awash in evil and the battle is still to be waged. We are right now in the most discouraging period of that long conflict. Humanly speaking, we can say we have lost all those battles.”

Things are definitely turning our way, but Prop 8 tells us that the evangelicals have not totally lost. Not yet, anyway. The article goes on to quote several leading evangelicals who say that it’s time for the religious right to “get out of politics” and “get back to teaching the Gospel.” Hallelujah!

Previous New Hampshire Decides This Week
Next Caption This