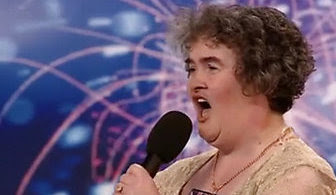 Queen Of The Internet Whether you like her or not, it’s rather fascinating to watch how Susan Boyle has blown existing internet viewing records out of the water.

The Internet has not seen anything quite like Susan Boyle, whose online popularity is headed straight to the history books. The video of Boyle’s performance in the reality show “Britain’s Got Talent” has set the record for the number of views in a week — and shows no sign of slowing down. According to Visible Measures, which tracks videos from YouTube, MySpace and other video-sharing sites, all Boyle-oriented videos — including clips of her television interviews and her recently released rendition of “Cry Me a River,” recorded 10 years ago for a charity CD — have generated a total of 85.2 million views. Nearly 20 million of those views came overnight. The seven-minute video that was first posted on YouTube and then widely circulated online easily eclipsed more high-profile videos that have been around for months. Tina Fey’s impersonation of Sarah Palin has clocked in 34.2 million views, said the folks at Visible Measures, while President Obama’s victory speech on election night has generated 18.5 million views.

Until last week, Boyle said she had never heard of YouTube.