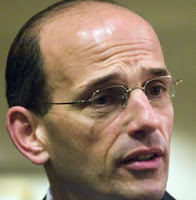 In a surprising move, Maine Gov. John Baldacci called the home of Pam’s House Blend blogger Louise yesterday to say he was reconsidering his position about signing the marriage equality bill should it reach his desk. Baldacci has been saying he was undecided for several weeks. On Tuesday the Maine Judiciary Committee strongly endorsed the bill and sent it on the state House and Senate who will consider it next week.

Baldacci was calling Louise to respond to an irate email that her husband had sent him. Go to her PHB entry for a transcript of the call, which floored the couple.

Previous Bye Matt
Next Olbermann: Rep. Virginia Foxx Is The Worst Person In The World